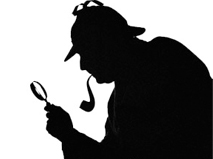 Who was at the bar that day? You need to remember, because the murderer was also at the bar that night.
Sanık
Tamam, Tamam,
okay düşünüyorum. düşün + üyor + um
I am thinking Barda bar + da
at the bar benimle benim + le
with me beraber beraber
together iki kişi iki kişi
two people oturuyordu. otur + uyor + du
they were sitting Yanımda yan + ım + da
to my side oturan otur + an
who was sitting adam adam
man çok çok
very sinirliydi. sinir + li + di
he was angry
Translate |

Okay, I'm thinking. There were two people sitting together with me at the bar. The man sitting by my side was very angry.
Dedektif
Çok Çok
very ilginç. . . ilginç. . .
intereting barda bar + da
at the bar oturan otur + an
who was sitting öteki öteki
other adam adam
man peki? peki?
and O O
he ne ne
what yapıyordu? yap + ıyor + du
he was doing
Translate |

Very intereting. . . and the other man sitting at the bar? What was he doing?
Sanık
Dikkat çeken dikkat çek + en
that stood out birşey birşey
something yapmadı. yap + ma + dı
he did not do Ama Ama
but arka arka
rear masada masa + da
at the table içkiyi içki + y + i
alcoholic drink fazla fazla
a lot içenler iç + en + ler
those that were drinking vardı. var + dı
there were
Translate |

He didn't do anything that stood out. But there were some people drinking a lot at the table in the back.
Dedektif
İçenlerin arasında iç + en + ler + in ara + s + ı + n + da
amongst those drinking kırmızı kırmızı
red elbise elbise
dress giyen giy + en
who was wearing bir kadın bir kadın
a woman var mıydı? var mı + y + dı
was there?
Translate |

Was there a woman wearing a red dress amongst those drinking?
Sanık
Hayır, Hayır,
no öyle öyle
like that birini biri + n + i
someone görmedim. gör + me + dim
I didn't see
Translate |

That's very strange, because you appear to be together with her on the security camera.
Sanık
Allahın belası Allahın belası
damned polisler! polis + ler
police Sevdiğim sev + dik + im
who I love kadını kadın + ı
woman size siz + e
to you vermeyeceğim. ver + me + y + ecek + im
I will not give Sevenler sev + en + ler
those that love asla asla
never vazgeçmez. vazgeç + mez
one doesn't abandon
Translate |

Blasted police! I won't give you the woman I love. Lovers never give up.
Play Dialog

The suffix -en makes the subject participle in Turkish. It follows e-type vowel harmony and is added directly to the verb stem. When adding -en to a verb stem that ends in a vowel, add a buffer y. Notice that (unlike -dik participles), -en participles don't contain any information about the person, since the word it is modifying provides the context. Finally, -en can be used to convey the past or present tense (a different suffix is used for the future subject participle).

When translating -en participles into English, we usually need to use a who or that clause: the man who is running, the doctor who is working, etc. Here are some examples to get you started:

Koşan adam.
The man who is running.
İçki içen kızlar arka masada oturuyorlar.
The girls who are drinking alcohol are sitting at the back table.
Uyuyan köpek.
The dog that is sleeping.
Beni seven kedi.
The cat that loves me.
İngilizce bilen bayan aranıyor.
A woman who knows English is wanted. (seen on a job post)

Just like all adjectives in Turkish, -en participles can act as nouns if the noun they are modifying is implied. Therefore, don't be surprised to see the usual noun suffixes attached to these participles.

Koşanlar.
The ones that are running.
Orada çalışanları gördük.
We saw the people working over there.
Dans edemeyenin adı Fırat.
The name of the one who can't dance is Fırat.
Kırmızı elbise giyenden korkuyor.
He is afraid of the one wearing the red dress.
Comparing -en and -dik

It's hard to explain the difference between -en and -dik without getting very technical. But we'll try. Use -en when the word you are modifying is doing the action; in the man who is running (koşan adam), the man is the one running. The man is the subject of the clause who is running

Use -dik when the word you are modifying is being acted on by someone else or something else; in the man who I ran into (rastladığım adam), the man is being run into by me. The man is the object of the clause - that is, the one receiving the action done by me.

dikkat çekmek
to stand out

You must answer every question.

Taha
Thank you sooooooo much my brothers for those Turkish lessons.I have﻿ really loved learning Turkish language with you...god blessed you.Bye﻿
May 10, 2013

Öğrenci
Hey Justin, I just wanted to let you know that on the dialog the translation for görünüyorsun pops up as "you seem" but I think it's supposed to be you saw or something along those lines??
Thanks! Love this website!
May 11, 2013

Öğrenci
Gorunmek can also been "he is seeming" in the sense that "he is appearing, displaying (showing)" to be something.

Justin
Whoops - sorry I missed this! Yes, the above post is right on.

Görünmek is the reflexive form of görmek (with that reflexive suffix -in). Often, when Turkish verbs take their passive or reflexive or causative (or whatever) forms, they take a bit of a life of their own. So, even though görünmek very literally means something like "to see yourself," it usually means something close to "it seems" in actual usage.

Sharapi
Please fix the 'speaking' for all lessons please
Sep 13, 2013

Can you please let me know why giten is not correct construction of "en" in Q-3. Teşekkürler
Dec 20, 2013

Debra
Why is it

Justin
You are now officially part of the Turkish Tea Time family, finding our typos and helping us fix them. Sorry about that.

"Dans edenin adı Fırat" is correct. I believe what we wanted to write was "Dans edemeyenin adı Fırat" = the name of the one who can't dance is Fırat. But you probably understand the buffer y just fine. If the verb stem ends in a vowel, add a y before -en. The stem of "etmek" doesn't, so there's no y. Our fault.
Feb 09, 2014

Debra
Oh my word! I need a lie down!
Correct twice.
You say the nicest things.

First, I am wondering about this sentence in the dialogue: "Ama arka masada içkiyi fazla içenler vardı." How can I tell that "fazla" goes with "içkiyi" and not "içenler"? I guess my first clue should have been that I usually think of "fazla" as meaning "too much" or "too many," and it wouldn't make sense here to say "too many drinkers." But if you translate it as "a lot," as the dialogue does, why does it not go before rather than after "içkiyi"?

Second, I am wondering about this sentence in the language points: "Orada çalışanlara gördük." Why is it not "çalışanları"?

Hope these are not dumb questions.

For the first one, "fazla" *does* got with içenler! So your intuition is correct, but your translation is just slightly off. Since "içenler" is derived from the verb "içmek," we can still see it modified like a typical verb.

As for "fazla" - I hear you. It used to be a source of frustration for me, as well. Turkish doesn't really have the same strong distinction between "too much" and "a lot" like we do in English, but I have found that Turks generally go with "çok fazla" when they wish to express "too much."
Mar 31, 2014

Öğrenci
Martha, no one answered your question about çalışanları, but I think you are correct. :) (I'm just learning too, though, so you may want a more expert opinion :) )
Aug 14, 2015

Öğrenci
One question. IF someone is studying a beginning lesson, the person reading the conversation needs to recognize this and adjust his/her speed. I'm not saying that you have to speak super slow or make your utterances non native speaker like, but the speed here is way too fast. Thanks a lot. :)
Aug 14, 2015

Öğrenci
Great podcasts. I'd like to subscribe but a bit worried about the fact that the last comment from you here was from 3 years ago.
Jul 26, 2018

stanka
It would have been great if there were written dubs for the movie excerpt "Troy"
Nov 22, 2020

To leave a comment or ask a question, login or signup.