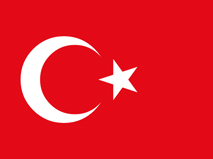 Well done. For how long have you been learning?
Büşra
Sadece Sadece
only bir aydır bir ay + dır
for one month öğreniyorum. öğren + iyor + um
I am learning
Translate |

Get out of here! You speak so well!
Büşra
Yok Yok
no ya. ya.
(exclamation) Şöyle böyle. Şöyle böyle.
so so
Translate |

Consider this lesson your crash course introduction to the Turkish language. If you're new to Turkish, this is the perfect place to get a broad view of the language's most important characteristics and features.

Turkish is spoken by about 70 million people in the world. Most of these people live in Turkey, but there are also substantial Turkish populations in Northern Cyprus, Greece, and Germany. Many of the central Asian countries speak extremely similar languages that we refer to as Turkic; some of these include Azerbaijani, Kazakh, Turkmen, and Uyghur.

Turkish and Turkic languages belong to the Altaic family. Japanese, Korean, and Mongolian are amongst the most similar distinct languages that you will find in the world.

Given the history of the Ottoman Empire's reach and influence, Turkish contains many words borrowed from Arabic, Persian, and (to a lesser degree) French. Many of these words have so-called "pure Turkish" or "Ottoman" equivalents that are often preferred.

Because the Turkish alphabet is a modern invention (reformed in the 1920s from Arabic script), Turkish is extremely easy to read and uses a character set nearly identical to that of English. Pronunciation shouldn't be too difficult for English speakers, with ü and ö being the only two sounds not found in English. Word and sentence-level stress does differ significantly, though, so mastering a Turkish accent still takes a lot of listening and practice.

The modern, standard Turkish accent is accepted to be that of native Istanbulites. For now, it's the only accent you'll hear on Turkish Tea Time.

By far the most defining characteristic of Turkish is that it is agglutinative. Agglutinative refers to the fact that Turkish derives almost all of its meaning from adding different suffixes to word stems. This concept isn't completely foreign to English speakers. For example, we have the suffix -ly that turns adjectives into adverbs: sadly, quickly, slowly, etc. As another example, take the word shamelessness that is comprised of two suffixes. -less serves to negate while -ness creates an abstract noun. Turkish works in this exact same way, but with nearly everything from tense to prepositions to mood to person.

Another extremely important and ubiquitous feature of Turkish is what we call vowel harmony. Vowel harmony refers to the fact that Turkish suffixes must dynamically change their vowels depending on the word to which you are appending them. While this gives the language a nice, coherent sound across words, it also means that every suffix will have multiple slightly different forms that you must choose between. For example, the present tense suffix -iyor may also appear as -uyor, üyor, or ıyor depending on the vowels in the verb stem.

Turkish has no gender, as in languages like French or German. It does, however, use it's plural second-person (you) as a singular polite form, as well.

Word order in Turkish is Subject-Object-Verb, unlike English's Subject-Verb-Object. So, while in English we say The boy is reading the book, Turkish says The boy the book is reading. Modifiers do work the same way as in English, however - adjectives and adverbs come before the words that they modify. Red book or Quickly ran are the same in both.

So that you can get a better idea of how suffixes can be used to form new meanings in Turkish, here is the word çiçek (flower) being suffixed to create new words.

And here's a preview of some of the fun verb suffixes you have to look forward to:

şöyle böyle
so so

You must answer every question.

Öğrenci
Hi
Can't seem to get the speaking exercise working on this one - I find this feature very usefu on your other exercises.
Oct 05, 2013

Bredo
Thanks again for a great web page.
There must be more than 60 million speaking Turkish. Only in Turkey there are 75 million.
http://en.wikipedia.org/wiki/Turkey
Oct 05, 2013

Öğrenci
hi guys,
i can't tell how much i love you. bushra and justin you're great,fun,sooooooooooooo cute. you make me smile all along the whole lesson. lessons without bushra are not the same:) you helped me alooooot with my turkish. great work, great every thing thank you very much. my whole family love you both.
Oct 05, 2013

May
Lovely and interesting lesson, cok ilgenc ders.
Busra dear your name is Arabic btw, it means "good news"
You cannot imagine how easy it is for me to learn vocabulary, my real challenge is in grammar especially verb conjugation.
InshaAllah will get there soon, with Turkish Tea Time of course :)
Oct 05, 2013

Öğrenci
Hi guys , in the 4th question the answer must be "bir aydir ogreniyorum but it gives me wrong answer .. When I clicked on check answer it gave me "bir web sitesi buldum" which is wrong because the question asks since when you've been learning Turkish and not from where.. Right?
Oct 05, 2013

Öğrenci
Hello Justin and Busra!
Great lesson and I love the new search function!
One thing that I would like to see is something on the best way to use the lessons...i.e. should you start with the noobie lessons first, then move to elementary and so on... How do you see the usage of lessons? I know that there are students with different knowledge, but what is the optimum usage of these lessons?Both of you have experience in language learning and I would like to know how you would use the lessons. I thank you very much:)
Oct 05, 2013

Andrea
Thanks Justin and Busra! I'm loving the lessons. You teach common words and expressions that are really useful. The grammar points are great too. It's fun.
BTW I noticed that Turkish shares many similarities with the Hungarian language as well. But the fact that Turkish is similar to Japanese really astonishes me!
Oct 08, 2013

Justin
Hi everyone! Thanks so much. We're glad you liked the lesson :)

@Bredo - we took our figure from the Wikipedia page on the Turkish language (http://en.wikipedia.org/wiki/Turkish_language), but digging around a little bit more, it looks like 70 million is a better estimate than 60 million. Nice catch.

@Öğrenci - We are actually putting together a "recommended order" for the lessons this week that will help dramatically with getting a better idea how to approach our lessons. So keep an eye out for that.

Justin
FYI - we just got done finishing our recommended ordering for all of the lessons so far. You can find that here: https://turkishteatime.com/archive/ordered/
Oct 09, 2013

Öğrenci
thanks for this great web site its very useful
Oct 13, 2013

Helena
hi guys, i am very happy that i have found this web site. i hope i will be able to dramatically improve my turkish :) tesekkur ederiz :)
Nov 09, 2014

Dilara
From what I can find online, The Altaic classification of languages has been discredited by most, if not all, linguists. I mentioned to someone that Japanese was one of the closest languages to Turkish and they pointed this out to me. Do you have backing for this?
Apr 28, 2017

Interesting! I just spent a long time reading up and it looks like you are correct.

Though, for anyone peeking in on this conversation, the debate appears to be very academic and pedantic. There's no question that there are profound similarities between the languages traditionally categorized as Altaic, but there are different schools of thought whether these similarities derive from a common ancestor or whether they are more coincidental.

To quote a small excerpt:

"The debate over the nature of the relationship between the various units that constitute “Altaic,” sometimes referred to as “the Altaic controversy,” has been one of the most hotly debated topics in 20th-century historical linguistics and a major focal point of studies dealing with the prehistory of Central and East Eurasia. Supporters of “Proto-Altaic,” commonly known as “(pro-)Altaicists,” claim that only divergence from an original common ancestor can account for the observed regular phonetic correspondences and other structural similarities, whereas “anti-Altaicists,” without denying the existence of such similarities, insist that they do not belong to the “core” layers of the respective languages and are therefore better explained as results of lexical borrowing and other forms of areal linguistic contact."
May 01, 2017

Justin
Anyway, thank you Dilara for bringing that up! Everything I've ever read classified it as Altaic, so I'm very glad to know that not everyone necessarily agrees with that!
May 01, 2017

Soheil
hello
i from Iran
i know Azerbaijan language little
many of your language are Persian world like
Hasta
many of world in Persian Language come from Arab :)
Feb 04, 2018

I'm Hatem from Libya ( North Africa) , my country was part of ottman land ,we have a lot of Turkish words like Kachik ,Shishma,Kondra, our culture are similar .

I'm interesting to learn Turkish language because I like ottoman history and their mosques.

To leave a comment or ask a question, login or signup.